Founded 40 years ago, Trimurti shut down in November 2014. In April 2018, Trimurti Village will be opening its doors ...

Founded by the psychotherapist, sociologist, ethnologist and artist Michel Sokoloff 40 years ago, Trimurti was a key venue for personal development courses in the Var region and for the whole of France for four decades. This important place has a strong, deep and rich history of hosting courses, training programmes and seminars, and facilitating cultural mixing and spiritual gatherings. More than a venue, it was a place of welcome and transformation that opened its arms to all while respecting difference, with a desire to share and pass on knowledge. 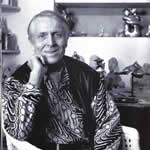 « I founded this place to make a dream come true. To create a place for meetings that would respect the natural environment, where everyone could come to rest and recuperate: by taking root in the earth like the trees, by reaching for the sky like the birds, by smelling the scents of Provence, by being lulled to sleep by the song of the cicadas and dancing with the wind, by meditating at daybreak when the vibrant nature awakens, in the light of the sun that brightens up the sky in pastel tones above the sea, and by tasting the serenity of the evening, when the sun sets, illuminating the land in all the colours of the rainbow, the horizon beyond the hills, inviting us to penetrate the world of the night and its mysteries ... Since its creation, Trimurti has been a land of welcome for all the world’s cultures. It is animated by vibrations and the spirit of those who have passed their traditions on to us, their ritual practices, while being open to the future, to those who open up new paths of exploration. I hope that your stay at Trimurti will be a time of rejuvenation, discovery and shared Love ».

Many people from the world of personal development came to Trimurti for a retreat, an inner voyage, a celebration, a ritual, a course or a training session. In an ideal location overlooking the Bay of St Tropez, Trimurti has that special Mediterranean charm that is so conducive to relaxation, contemplation, and connection with yourself, nature and other people.

After Michel Sokoloff passed away in November 2013 and Trimurti closed in November 2014, the site lay dormant for 3 years, waiting for the next chapter in its story. Many people were curious to know what would become of this magical place. Many people hoped that its founder’s dream would live on ...

The Hameau de l’Étoile team has given new life to Trimurti, which is set to open again in April 2018.

Building on the history of Trimurti and its founder Michel Sokoloff, the place is being revived under a new name: Trimurti Village.

With the same expertise, sophisticated and varied cuisine, the same quality hospitality and the same special, welcoming atmosphere as the Hameau de l’Étoile, our aim remains unchanged: to welcome you in an idyllic location and be at your service to ensure your events are a success.

We wanted to honour and thank this visionary by changing the name of the “Centre” room to the “Sokoloff” room. This large, white room will honour its founder’s memory and the history that Trimurti Village is built on. Adjoining the restaurant, this building formerly called the “Centre” is becoming “La Source”. It’s only natural that the memory of the past should now be inscribed into the walls of Trimurti Village.

We are beginning a new chapter with you, one that we hope will last for many years to come! Trimurti Village’s ambition is to make Trimurti’s heart beat while adding the special touch that has made the Hameau de l’Étoile such a well-known and well-loved success.

The venue is just waiting for you and we look forward to connecting with you, meeting you and welcoming you from April 2018 onwards.

Discover the venue and its rooms, so you can already start to book, plan and organise your next event at Trimurti Village...